Out of the Window ‘The Island Connection 2’ 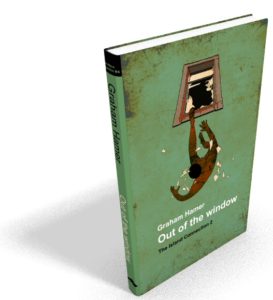 In ‘Under the Rock‘, the first book of The Island Connection series, we met a couple of young girls whose actions helped save the day when the island was under threat. In ‘Out of the Window’, we meet the same two girls again, two years later. Still a bit crazy, but growing up fast. They make a new friend whose life is in danger. But what can they do against battle-hardened thugs?

And what really happened in Amy’s bedroom the night her father went out of the window?

Out of the Window – OPENING PAGES

Amy’s teeth chattered as the glacial drizzle showed no signs of letting up. It was one of those cold, miserable, penetrating, grey, non-stop drizzles that soaks through meagre clothing and slowly annihilates a person’s confidence. With no signs of any customers, the harbour-side hot food kiosk had closed early and Amy had taken the opportunity to rifle through their bins, where she found some stale burger buns that would keep her going until tomorrow. Head bent low, she tore strips off the first bun and chewed ravenously while she huddled and shuffled her way past the lifeboat station. She looked up as a large seagull squawked and dived towards her, trying to take the bun from her hands. The damn things were like Exocet missiles over here but Amy was too fast because her need was too great to allow a bird to take her only meal of the day. She whipped the bread inside her saturated fleece and walked faster with the harbour on her left and the castle walls on her right.

One hundred metres further, she reached the granite stairs that gave access to Peel castle. The steep stone steps leading up to the entry portal were sheltered by overhead slabs of grey granite. She was still buffeted by the wind, but at least it was dry and Amy looked up with tired liquid-green eyes, grateful just for a small amount of respite. In a few more minutes, she would be a little drier and a little warmer and, eventually, the shivering would stop, but she still had to force her aching legs to mount every step. It was going to be another wretched night on a hard tiled floor, but what other choice did she have? At least the rain disguised her tears of anger and frustration.

She hauled her tired body up the wide stone steps until she reached the locked gate at the top. Peel castle, on the Isle of Man, was not scaled like a simple Norman castle with a keep and a moat round the outside. Peel castle sat on an islet attached to the main island by a one hundred metre long causeway. It had high granite walls and stretched for almost twenty acres. For summer visitors it represented a way to pass a pleasant afternoon in a gentle ramble, poking their heads into the various nooks and crannies. But the castle remained closed for five months in the winter. And, on a wet early December afternoon, it was the perfect hideaway for somebody who didn’t want to be found. She squeezed through the narrow gap between the unforgiving granite wall and the full height steel gate that stayed locked all winter. Luckily she was a slightly-built girl because otherwise she would never have made it through.

High inside the castle grounds, the summer visitors enjoyed a splendid view of the rolling hills to the east. But, today, there was nothing other than a dirty grey sky and more freezing rain. Amy pressed on as fast as her tired legs and wet jeans would take her until she arrived at the ladies’ washrooms. As she had discovered a few days earlier, the outer door had no lock, so she let herself in, pushed open the door to the nearest stall, and sat on the toilet. Her whole body shook with cold and she knew she needed food and warmth. She could do something about both, but not much. She pulled the burger buns from inside her wet fleece and tore at them before pushing wads of bread into her mouth. It tasted of tea leaves and cigarette ash from the inside of the bins, but ignored it as she filled her belly for the first time today. After several bites, she put her head down to the hand basin and drank water from the tap to wash down the dry bread.

Fortunately, on her first visit, Amy had found the main fuse for the washrooms and had turned on the electricity. She hit the button on the electric hand drier, grateful for the stream of warm air. Then she flicked on the light and closed the outer door. In the mirror over the hand basin, her image was etched with fatigue. She ran her hands through her wet hair to drag it away from her face.

Amy had come to the Isle of Man to try and sort things out with her aunt but had found herself the victim of a vicious verbal attack on the doorstep, with no chance of explaining her thoughts. And the verbal attack included a specific threat of a physical follow-up which, in her aunt’s own words, meant only one thing. Amy knew what her aunt was capable of and fled, in fear for her life. The fact that she was her niece would have no effect on her aunt. The only outcome that would satisfy her was Amy’s death.

An easy read that will make you smile and cry in equal measure
By mousyb on 21 Aug. 2016
Amy’s on the run from her crazy aunt. She has no money and nowhere to run to. But her luck is in when she bumps into two local teenagers who decide to ‘adopt’ her. In the space of just a few days, she discovers how different life in a small community is from the one she was used to in Liverpool. But Amy is hiding a secret that Liverpool gang leaders are willing to kill for and suddenly she is a target for more than just her vindictive aunt.
‘Out of the window’ is Amy’s story. It compares the lives of good people who simply know how to get on, with hateful people whose only pleasure is in destroying and controlling others. It’s a stand-alone story, but some of ‘The Manx Connection’ characters from earlier books help move the story along at a good pace.
There were times in the story where I laughed aloud and times in the story where I choked up. It’s just one of those books that will grip you right to the last page.
Book cover design by Bruno Cavellec, Copyright © Bruno Cavellec 2016.
Image used and published according to the licence granted by the artist