It was that wonderful writer Terry Pratchett who said, “Writing is the most fun you can have by yourself”, yet I hear many writers say that it’s a lonely occupation. How can you be lonely when you are surrounded by your characters? In all my books I have people who I get on with just fine, and people who I really don’t like. It’s just like the real world, except that I can control what the characters do and say. Mind you, there have been many times when the characters take over and decide for themselves what they are going to do, and that’s when it really gets to be fun. You must allow your characters to act in a way that is consistent with the characterisation that you have created for them, and there are times when that characterisation will take you down a different route to the one you might have planned.

Make strong characterisation work for you 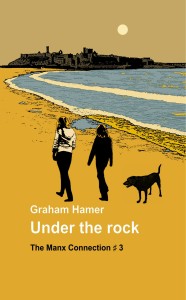 In Manx Connection #3 – ‘Under the Rock‘ two young girls are instrumental in resolving the story. Yet when I first created them, they were planned to be no more than minor characters. However, the ease at which they slotted into the storyline was due entirely to the early strong characterisation with which I had bestowed them, and they developed themselves into two great characters. So good, in fact, that Manx Connection #4 – ‘Out of the Window‘ followed their story two years later.

Sometimes, you can create a character who, superficially, may appear to be unlikeable, getting little empathy from your readers. But you can use this to create twists in a plot by eventually explaining why a character acts in a certain fashion. Suddenly, your readers will understand why he (or she) does what he does, and they can actually end up rather liking one of the bad guys. Tricks and twists like this will hold your readers’ focus and built loyalty for your books. Above all, build strong characterisations, whether for your protagonists or your antagonists.

Book Cover Choices
Life as a writer – In your dreams!
A personal story
The Manx Connection – why?