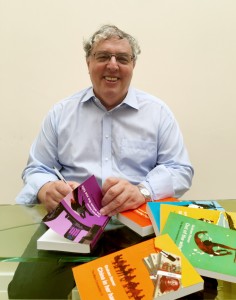 The first step in writing a book is the desire to do so. I think I have always wanted to write a book. I’ve always had a thought somewhere at the back of my head that it would be ‘a good idea’ to write a book. And I guess that made me the same as almost every other person on the planet who is capable of reading and writing. However, at the tender age of twenty-one, life overtook me and I moved away from creative ideas and into the world of families and houses and just plain living.

Since then, I have been very, very lucky. I have worked for other people and I have worked for myself. I have worked in Britain, France, Kuwait and the Netherlands. My early career saw me learning accountancy. In mid-life I was heavily involved in the construction industry. The later stages of my working life saw me back in accountancy and finance-related matters as European Business Analyst for a major international company.

I’ve had a great life in many ways. Sure, there have been ups and downs. There have been achievements and there have been disappointments. But I could never claim it’s been boring! As I drifted towards retirement, I again felt the urge to take the first steps in writing that book, which I knew was nestling somewhere in my brain. Eventually, I dared to put finger to keyboard and made a hesitant start. At the end of the last century (that sounds like ancient history now, doesn’t it?) I penned my first attempt. It was called ‘Paperchase’ and was a weighty tome of 120,000 words. Then I went back to my ‘real’ work and got on with my life.

Ten years later, I took another look at ‘Paperchase’. As a first effort, it wasn’t that bad, but I knew I could do a whole lot better. So I wrote ‘Walking on Water’, my second novel. And that was when I realised that all I had been missing was practice. To perfect any skill, you have to practise, and I wasn’t doing it nearly as often as I should. Now, I have rewritten ‘Paperchase’ and it is published as ‘Chasing Paper’. It flows more easily, it’s less than 90,000 words and it is a far better novel for it. Now, I actually like it!

I initially thought I would go down the traditional publishing route but after discovering the amount of wasted time it takes, I decided to self-publish. I am in the fortunate position of writing for fun, not for a living, so I never expected to sell tens of thousands of books. Good job too, because even after press releases and some targeted marketing, I only sold a few. Literally, a few. But what I did discover is that the first book you write will change your life. It really did change mine, as I learned the process of writing (and now I’m learning the process of self-publishing). A while ago, I didn’t have a clue about marketing online. I had focused on traditional PR, but surely the internet was the way to reach more readers? So I started researching about blogging and social networking and other methods of internet marketing.

I have personally grown as a writer and am currently writing my ninth book. I continue to invest in my education as an author and I absolutely
love the online community. Come with me on my journey, if you will. I believe it will be interesting as well as instructive.

My own first step, Chasing Paper, is available on Amazon.com and Amazon.co.uk in both paperback and Kindle.