People relocate to France as expats for many different reasons. Often it’s the climate that attracts them. As an expat myself, living in France for six months every year, I have an opportunity to experience a way of life that is rich in culture and entertainment. France is notable for its cultural centers and significant cultural activities like arts, history, and cuisine.

Overview of France as an Expat Destination

About 15% of people living in France are above 65years. This means that France has become a popular destination for retired expats and this is evident in the fact that there are 4.5 million foreigners living in the country. Health services in France are excellent.

France is characterized by three climates. Western France normally has substantial rainfall, cool winters, and cool summer. In continental (eastern and central) France, the climate is warm summers and cold winters often with deep snow. Southern France experiences cool winters, hot summers and not as much rainfall as western France.

Cost of Living in France

Generally, retail prices are quite high in France. However, the retail market in France is a highly competitive one, and traders often realize only a small profit from sales. Paris especially is among the world’s most expensive cities to live in and as an expat, you have to bear this in mind.

Inability to communicate in French can cause problems. French peoplewill only make the effort to help you, if you make an effort to speak their language. That should be stupidly obvious but many people who leave to live in France do so with no working knowledge of the language.

Prepare yourself properly and, as an ex-pat in France, life can be very rewarding. Be prepared to accept a different culture and different standards. And be flexible. 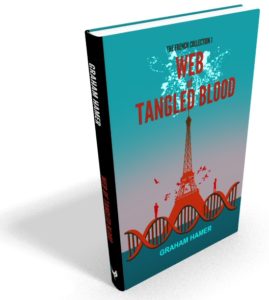 The French Collection books are all based in France and, as well as telling good stories, will give you a flavour of the country and its people.

When Paperchase became Chasing Paper
Researching locations to write about.
Writer’s Block – how to overcome it
Devil’s Helmet – spreading fear by bacteria

© 2015 - 2019 Graham Hamer ALL content is protected by copyright law. If you wish to use any images or text, please ask first.