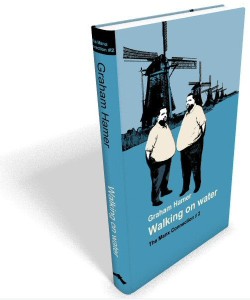 Just as an early pointer… if you read your books electronically (e-book) you’ll find that Chasing Paper is free on all the main online book stores. And in Chasing Paper, you’ll find links so you can get Walking on Water free too. (Or just go here Free e-book)

Back to the plot…

There was a handful of characters who I had grown to rather like in Chasing Paper. Two of them had been left in a state of uncertainty at the end of the book. So I got to thinking what would they do next. Where would they go? How would they survive? They were, after all, born survivors. But working for a living held few attractions. I was living in The Netherlands when I wrote Walking on Water, so it seemed the natural place to bring my protagonists. For that reason the action is based in the flat, wet wastes of The Netherlands. The place where billions of tons of water are held back by earth dykes which, in normal times, are adequate for the job. But if somebody wanted to destroy vast tracts of the country, the answer was already staring them in the face.

Okay, that’s two strands (former characters whose stories are unfinished and the destruction of The Netherlnds). The third strand was a contract killer looking for a man who was running from his own twin brother. Will the man escape or will the brother’s hit man get him first? The answer to that is not revealed until the very end.

Vicar’s Lot – understanding The Vicar
Ideas for Novels
Self-Publishing – the pros and cons
Life as a writer – In your dreams!